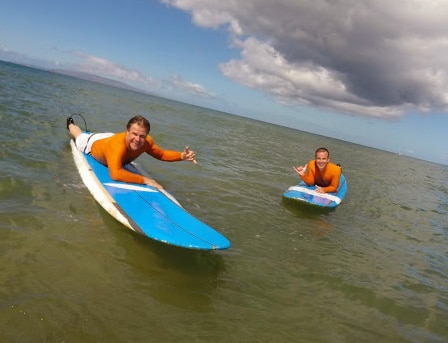 As a surfing beginner in Maui, one of the first things you’ll need to learn is proper surfing etiquette. Not only are these basic rules of surfing for your safety and that of other surfers, but following this surfing etiquette will also help you gain respect from local seasoned surfers. And they might even give you some helpful tips in the lineup. 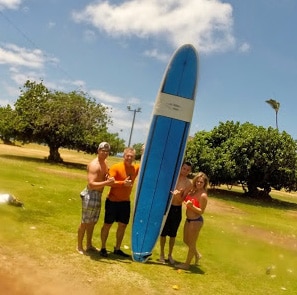 So as part of your Maui surf lessons, you’ll need to understand these few basic ‘rules of the surfing road’ before you embark on your surfing or “he’e nalu” journey.

Surfing Right of Way. Just as with driving, there is a ‘right of way’ in surfing that surfers must yield to. The first standing surfer or the surfer closest to the peak of the break has the right of way on that wave. Anyone else paddling for that wave should stop. The surfer riding the wave has the right of way and the surfer paddling out to the break must yield. This means getting out of the way whenever possible, even if it is into the breaking wave or behind the rider.

If you’re paddling for a wave and someone is paddling out toward you, make eye contact with that person and indicate your intended direction in reference to them.

Don’t ‘Drop In’ on or Snake Someone. This shouldn’t be a problem if a surfer follows the right-of-way rule. But “dropping in” on a surfer basically means you’re cutting them off while they’re catching a wave. This happens when someone further out on the shoulder of the wave tries to catch a wave another surfer is already riding or has claimed, thus cutting off or blocking the first surfer. This is, of course, very offensive and very dangerous. The surfer with the right-of-way riding the wave could very easily run into the surfer dropping in. This could happen by accident so always stay alert to where others are around you.

Snaking is a more deliberate drop-in where someone knowingly, and often more subtly and deviously, paddles around a person who has the right-of-way and catches the wave they were going for.

Don’t Ditch your Board. As a beginner, it may be a little difficult at first to handle your board in the ocean waves. But don’t let go of your surfboard. If you throw your board behind you in a big wave, there’s a good possibility it will hit another surfer, which could severely injure them. Even with a leash attached, there’s a chance that the leash could break or detach itself from the board. Always put a great deal of distance between you and other surfers, paddling next to them, not in front or behind them so that if you’re board does get away from you, it won’t injure others.

Surfing in the right location for your skill level and ability will also help you to have more control over your board and allow you to safely surf with others.

Don’t Paddle Into a Lineup. Again, the right-of-way rule says that the surfer riding the wave has the right of way. Thus, if you are paddling out, it is your responsibility to stay out of the way of riders on the waves. Don’t paddle directly into or close to a lineup. Always paddle out around the break in the channel so that you’re not in the path of oncoming surfers.

By keeping in mind these few simple guidelines of proper surfing etiquette, you’ll not only be riding a wave in no time, but also have the respect of the local surfing scene.